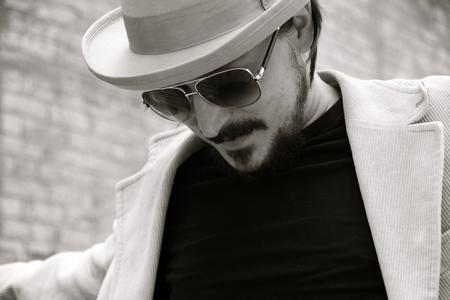 "As true to himself as Gus Moon can seem, when pick hits string and he pulls that first lyric up from his gut, he transforms. A Gus Moon show is as much a séance as it is a musical experience, as he melds personal experience, troubled characters, and often more-troubling narratives into many of his songs. He becomes the persona of the songs, like an actor might embody a role. It’s powerful. His mouth is a channel where several voices erupt, recalling the brokenness of their bad loves and the triumphs of their picking up the shards. Other songs are much more topically bright, but there’s always some sort of balance in his songs between the darkness and the light. A balance reflected in his voice. Just enough polish to know it’s been taken care of; just enough scratch to know it’s seen its share of heartache."
-Patrick Barcus, National Road Magazine

That's so funny. That's exactly what I was going to say!

Gus joined us for a few PBRs recently. Always a pleasure to see a huge talent that also has a huge personality. Gus is a great guy, on stage and off.